A Cabinet for Wilberforce University 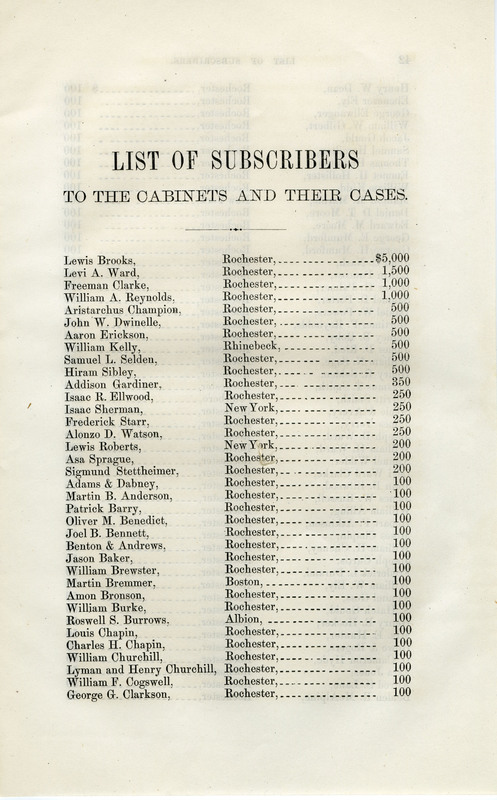 Notice of the Ward cabinets...the University of Rochester (1863). First page of subscribers' list

One of the chief aims of Ward's Natural Science Establishment was to equip schools with natural science collections. The Bulletins frequently list colleges and universities among the institutions who had purchased cabinets.

Some institutions could pay the costs out of their annual budgets; others raised the funds from donors or subscribers. The University of Rochester's collection was funded by subscribers.

Wilberforce University was founded in 1856 and is the oldest historically Black college in the United States. The effects of the Civil War on the institution's finances forced it to close in 1863; it would re-open in 1865 with AME Bishop Daniel Alexander Payne as President.

The story of how Wilberforce got its Natural History cabinet is told in The Wilberforce Alumnal (1885), and in the letters in the Ward Project. 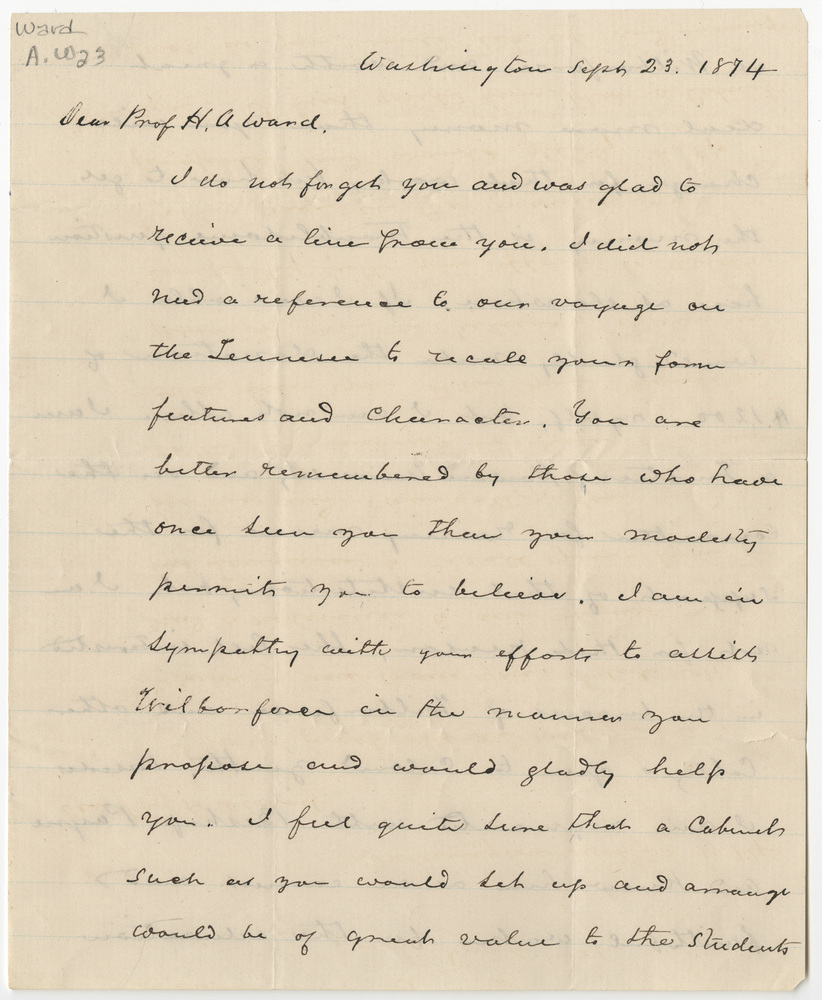 Henry Ward could see the need for the school to have teaching collections, and wanted to help find the funding. In September 1874, Ward contacted Frederick Douglass in the hope that he would contribute.

Douglass and Ward both lived in Rochester (Douglass would relocate to Washington, D.C. in 1872), but both men were almost constantly on the road--it is not surprising then that Douglass comments on remembering meeting Ward while travelling, rather than in Rochester.

Douglass turned Ward down, citing his allegiance to Howard University as a member of their Board of Trustees, and directed him to visit Gerrit Smith and make his pitch to him, which Ward apparently did. Smith died on December 28, 1874 before he could commit to the funding.

Almost twenty years later in 1893, Frederick Douglass would receive an honorary degree from Wilberforce, as well as accept a position on their Board of Trustees shortly before his death in 1895. 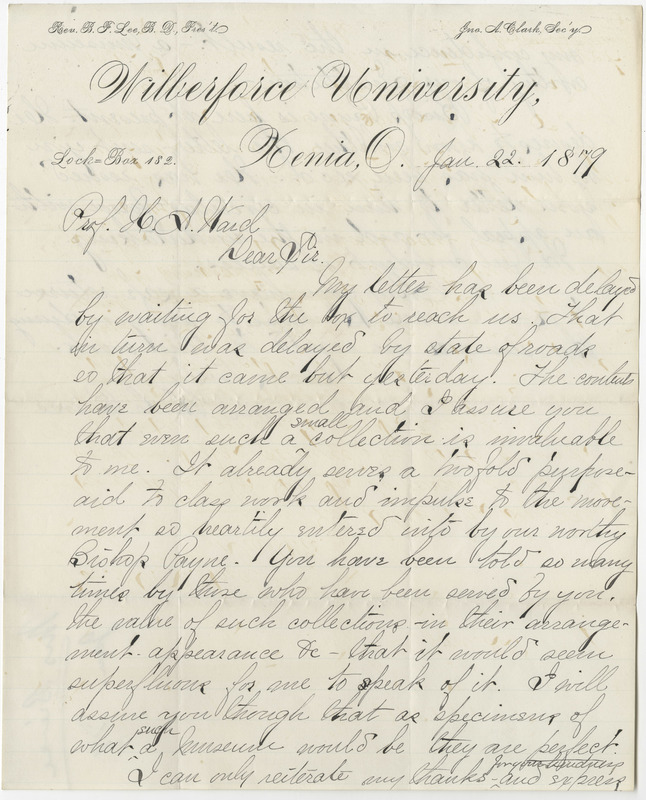 In December 1878, Ward wrote Bishop Payne proposing that he would assist with the fundraising, as well as give the University a discount.

A January 1879 letter from S. C. Bierce confirms that the text Ward suggested for a fundraising letter, also called a circular, had been received by Bishop Payne.

Bierce--Sarah C. Bierce Scarborough--is one of many women represented in the Ward Papers as educators, business owners, and scientists.

A graduate of the Oswego Normal School in New York,  Bierce taught French and the Natural Sciences at Wilberforce. She oversaw the construction of the room in which the cabinet would be installed, and kept Ward up-to-date on the progress, and her plans to travel to Rochester to meet with him about the materials to be purchased. 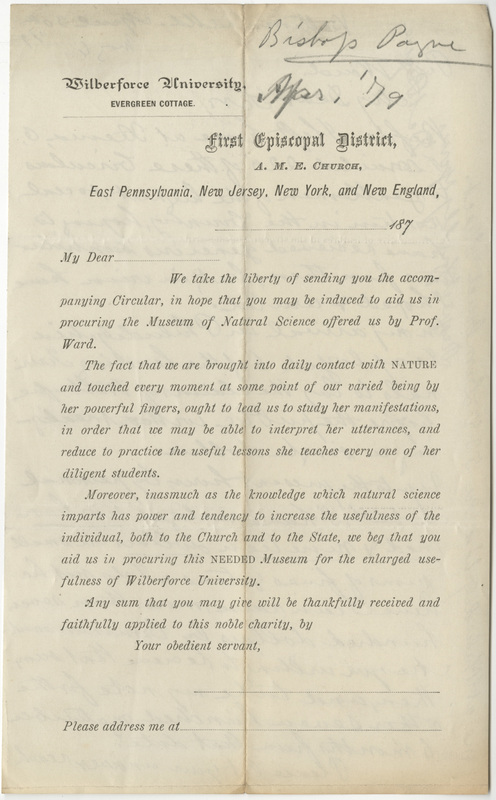 In April, Payne sent Ward a copy of the circular, and used the blank back for his letter.

The series of letters throughout 1879 from Bishop Payne and Sarah Bierce Scarborough to Ward document the difficulties they found in raising funds for the cabinet.

As Ward's 1890 list of institutions equipped with cabinets confirms, Wilberforce University did succeed in funding its Natural History Museum, and proudly highlighted the resource in its 1888-89 Annual Catalogue:

Museum Hall was fitted up in 1879 for the reception of a Museum valued at $2,000. The museum contains collections in Botany, Mineralogy, Paleontology (casts principally), Lithology and Zoology. These selections have been made with special reference to working value and usefulness. They thus are at once adapted to meet the long felt need of affording students an opportunity for their scientific study, which can only be pursued successfully with suitable specimens.

We solicit from all our friends such specimens as will add to the interest and value of our collections.

← #Transcribathon, and on, and on...
Read more about Ward's Natural Science Establishment →
A Cabinet for Wilberforce University